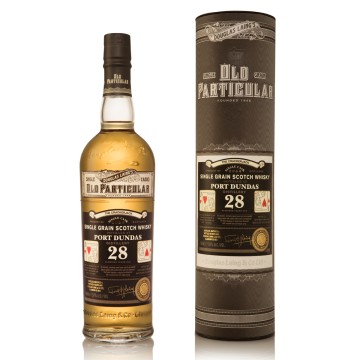 
Cara Laing, third generation in the family firm, comments: “As a self-confessed sweet tooth, this antique Port Dundas spirit is truly a dream dram. Its sherbety nose hints at the vanilla toffee and rich molasses palate, and runs to an indulgent finish packed with cappuccino, crushed nuts and maple syrup. The Port Dundas Distillery, in our home town of Glasgow, closed almost 10 years ago, so it’s a real privilege and pleasure for us to release this finite, charming whisky”.
Old Particular Consortium of Cards Crackerjack Port Dundas 28 Years Old

The unveiling of “The Crackerjack” comes as the family business reveals an enviable line-up of Old Particular bottlings, including the following, amongst others. A Strathclyde 11 Years Old Single Grain, finished in a Sherry butt, is bottled at 55.5% alcohol strength and shows rich molasses, mouth-coating coffee and a caramelised nutty character. An 18 Years Old cask, distilled at Auchentoshan, displays an “American Cream Soda” character, with a yield of just 251 bottles. From the Speyside region, a Glen Keith 21 Years Old, distilled in 1995 and bottled at 21 Years Old, is said to offer a taste of “Grandma’s lemon meringue pie”, whilst a Sherry-matured Allt-a-Bhainne 16 Years Old is “bursting with macerated fruit, sweet citrus and long spices”. From Islay comes Old Particular Bruichladdich 12 Years Old, showing a coffee character with lemon peel and biscuit.

In line with the founder’s philosophy, to bottle Scotch Whisky “as natural as it gets”, Old Particular is proudly presented without colouring or chill-filtration, and at high alcohol strength, in order to deliver an experience akin to sampling straight from the cask in a distillery warehouse.